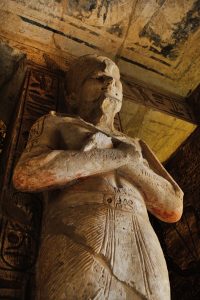 If you are searching for a romantic, relaxing way to visit the top tourist sites of Ancient Egypt, there is just one way to do this – take a luxury Nile cruise. Along the banks of the Nile is where the ancient Egyptians lived, and this is why most of the Pharaoh’s tombs and temples were built near or on its banks, and why the best way of navigating the attraction is on the water itself.

If you are considering going on a cruise, or are about to set out on one, we have chosen our favourite sites from the ancient world that you want to be sure to visit in order to make the most of this amazing destination. You can begin your cruise from Cairo in the north, or start your journey in the south from Awan or Luxor. In this article, we will be following the current of the Nile river and still begin our sightseeing journey from the gorgeous city of Aswan, which is ancient Egypt’s southernmost frontier. Later, we will be focusing on Luxor and Cairo.

Aswan was Ancient Egypt’s southernmost frontier and the most beautiful part of the Nile. It flows around the emerald islands and cuts through the golden deserts. Known as Swenet or Swen originally, it was the gateway of Africa and an important crossroads of trade. It was also a place where granite was quarried for a majority of the temples and monuments that were built during ancient times. Aswan is an excellent place to visit and features a relaxed Nubian culture that is very different from the frenetic activity of Cairo or the bustling tourism of Luxor. There are several must-see attractions in Aswan to visit, including:

Abu Simbel – It isn’t easy to get to this ancient temple complex. However, it is definitely well worth the effort. The temple was built under the reign of Rameses II. It is made up of two chambers and guarded by four large statues of Rameses. This impressive structure was carved into a rock face originally, which took 20 years. The temple was relocated during the 1960s in order to protect it against erosion as a result of the Aswan High Dam construction process.

Temple of Isis at Philae – Many consider this temple to be the final one that was built in classic Egyptian style. UNESCO relocated this impressive temple before construction started on the Aswan High Dam. It features soaring columns and amazing hieroglyphics, along with a Light and Sound Show that visitors can enjoy.

Kom Ombo – The rare double temple was dedicated to the falcon god Haroeris and the crocodile god Sobek. This soaring structure is completely symmetrical and has multiple chambers that were formally courts, temples, sanctuaries, and halls. Transport yourself back to ancient times as you stroll among the multiple colonnades.

Temple of Horus at Edfu – This temple is located on the West Bank of the Nile, 60 km north of the city of Aswan. It is one of the best-preserved of Egypt’s ancient monuments. Dedicated to the son of Osiris and Isis, this Ptolemaic temple features a classic structure design and contains numerous chambers, courts, statues, and walls with hieroglyphics. The Temple at Edfu is Egypt’s second-largest temple and is very popular with tourists. It provides one of the most authentic experiences of ancient Egyptian life.